Sellers: How To Avoid Getting Shown The Red Card

No salesperson ever sets out to give a buyer the hump, but that is what appears to be happening with increasingly regularity. Sellers are making obvious mistakes that can result in immediate disqualification. 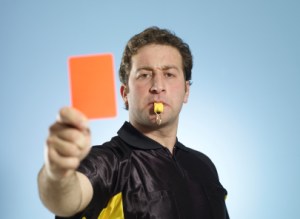 An increasing numbers of sellers are unwittingly rubbing buyers up the wrong way.

They are ‘putting the buyer’s nose out of joint’ (so to speak) by questioning their process and second guessing their logic, or impugning their motives.

The offending sellers are scuppering not just this sale, but any prospect of a future customer relationship by:

Let’s examine each one in turn and how it can be avoided.

Lashing Out At The Buyer 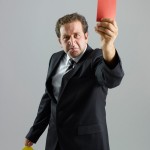 I have listened with great surprise to buyers recounting incidences of seller cattiness, or aggression. That is where sales people have unwisely vented their frustration at the process, or disappointment at the result on those in the firing line – buyers.

‘It is procurement that gets it in the neck from suppliers and personally I have had enough!’ said one procurement manager. The sentiments were echoed by many more.

Another exasperated buyer warned that ‘getting aggressive, or abusive with procurement is a red card offense.’

Salespeople under pressure do stupid things and having ‘a go at’ the buyer is a good case in point. As one buyer put it ‘Ok salespeople are under pressure to meet target, but taking it out on a supplier is only going to make things a whole lot worse.’

‘It is procurement that gets it in the neck from suppliers…’

‘So, you lost the bid, get over it!’ exclaimed another buyer. ‘I did not get it my way, so I am going to throw a tantrum. Deal with it in a mature fashion’ she continued.

‘There is always the next bid to win, however if you lash out at the buyer you can forget about getting the next project either’ said another buyer. ‘Be warned we have long memories – we won’t forget!!’ the manager concluded.

The clear warning repeated by many buyers is that aggressive, abusive, or catty behavior will result in a severe penalty for the seller – one that could have consequences far beyond the next sale. As many buyers pointed out ‘it will scupper not just this sale, but the changes of any future sale’.

‘Lashing out at the buyer’ also means that the seller is likely to get any help in understanding what happened, or what to do next. That includes why the deal was lost and how to ensure success in the future.

‘It is like how a spoilt child would respond – throwing a temper tantrum when he/she does not get what he/she wants’ said another buyer.

‘We are used to legitimate inquiries, even objections’ said one public sector buyer. He continued: ‘we live constantly aware, even in fear of; the remedies directives and are no longer surprised when a supplier brings a legal adviser to the formal de-brief. Contesting the decision, if done in a professional and business-like manner is fine. That is business, so to speak. When the seller lashes out and makes it personal that is another matter.’ 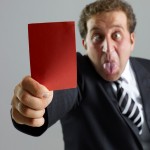 Professional buyers complain that they are increasingly the target of seller abuse. ‘Don’t shoot the messenger, just you because you don’t like the message’, was the advice of one procurement manager. ‘The procurement manager might be the soft target, but he, or she was unlikely to have been the ultimate decision maker’ added the manager.

‘A cross-department team of up to 6 people was involved in making the decision. Dozens of other were consulted and ultimately the purchase was signed off at board level. So, why is the unsuccessful bidder pointing the finger at the procurement manager?’ asked the professional buyer.

The reality is that many professional buyers have a certain degree of empathy for sellers. No more clearly is this the case than in the public sector where buyers are all to aware of the demands that rigid procurement practices place on vendors and particularly smaller indigenous vendors. In private they are almost apologetic, but in public they have no choice to stand by the process.

Sellers don’t have a monopoly on frustration, it is keenly felt by public sector buyers too. So, hitting out at the buyer is not only futile, but often unfair. There is a need among salespeople for a little more buyer empathy.

Having The Last Word

Surprisingly, some salespeople make the mistake of telling the buyer he/she has made the wrong decision, even hinting that they may regret it. However, as buyers point out it is the seller that ends up full of regret.

Let’s face it ‘you’re wrong!’ is something that a buyer absolutely does not want to hear. Nobody wants to be told that they have made the wrong decision, particularly when the decision has taken months and has involved lots of analysis, as well as people.

The chance of the jilted supplier saying something that changes the buyer’s mind is very slight. The chance that it will improve the buyer’s opinion of the seller is even lighter still. Such untimely words are much more likely to do harm, than good.

‘The advice for sellers is to ‘go away and cool off…’

The advice for sellers is to ‘go away and cool off’ because ‘in the heat of the moment they are likely say and do things that they will come to regret’. 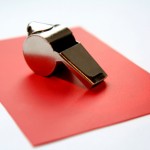 ‘Hell had not fury like a salesperson scorned’ joked one buyer. The point was a serious one however. Most salespeople don’t like rejection and they don’t deal with it very well.

The salesperson has invested heavily in the sale, over a period which is likely to have spanned many months, if not quarters. It is an investment that is not just financial, but emotional.

So when something happens that threatens to undermine all that effort it is not surprising that the salesperson reacts, rather than responds. That is to say he/she reacts emotionally, rather than logically, taking it not just as personal, but a professional setback.

The advice from buyers is ‘don’t take it personally, and don’t make it personal.’ ‘It is not personal – it is just a business decision’ commented one buyer.

Over the different stages of the sales process a relationship, or rapport has developed, this can and should outlive the individual tender/bid. So, don’t scupper the relationship because of the sale. Instead, look to the next sale and to the lifetime value of the customers.

Fighting Against The System

There is a problem – buyers love rules, but sellers don’t. But seller belligerence in the face of ever more rigid buying processes and procedures are a sure way to put the buyer’s nose out of joint.

Rule-makers and rule-brakers are at opposite ends of the spectrum, in terms of personalities, attitudes and behaviours. When the two are brought together clashes are almost inevitable. However, buyers offer a clear warning to sellers – ‘reeling against the system won’t work’.

‘The rules have been made for everybody…’

As buyers point out ‘The rules have been made for everybody and apply to everybody’. For this reason trying to circumvent, or bend them will inevitable cause buyer ire. That includes trying to curry favour, or trying to go around, or over the head of the buyer.

As buyers point out ‘You have to play by the rules, if not then you should not be playing at all.’ They are adamant that the old relationship or strokes approach to selling is dead.

How To Avoid Getting The Red Card

Sellers need to be more zen-like. That is more calm and balanced in their dealings with buyers. As one manager joked ‘sellers, even when under great pressure, must posses the Ghandi-like qualities of patience and peacefulness!’ Above all they need to show greater respect for buyers and the importance of their role.

‘Sellers need to be more zen-like…’

We made a note of some of the many suggestions as to how buyers could keep their cool and avoid getting shown the red card.

1. Salespeople are typically assumed to be confident, maybe even brash. However, times (or more to the point buyers) have changed and seller humility is an increasing part of winning the sale. Sellers are increasingly required to ‘bite their tongues’ and to ‘put their egos in the back pockets’.

2. As the advice goes – seek first to understand then to be understood. Develop your level of buyer understanding, or empathy. Engage with procurement, understand their role and their responsibility.

3. Draw the line between being assertive (as in standing up for your rights) and being aggressive (as in threatening the rights of others). Put respect, trust and parity of esteem at the center of your sales philosophy and adopt a genuine win-win attitude. This will greatly reduce the likelihood of a flare-up between the two sides.

4. Set the standard that you expect from buyers in your own behavior, by being open and honest from day one. That means addressing anxieties and concerns as they arise, rather than bottling them up till you explode. 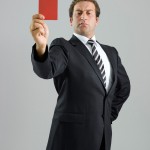 5. Develop a fuller understanding of the buying process and procedures. Forewarned is forearmed – there is no point in getting surprised and exasperated by processes that are simply a matter of fact in a particular organization. In this respect good buyers are increasingly recognizing the need to tell vendors just what the tendering process involves, so as to enable them to make an informed decision to bid.

6. More important still keep the person who is emotionally involved, or hot headed under control at those particularly tense moments in the process. Make sure there is a balance of hot headed and even tempered on your team for the opportunity in question. Ensure that de-briefs are undertaken by somebody who can be dispassionate and objective.

7. If you lose your cool, apologize and do it fast. Be the first to say you were wrong. That costs nothing. It does not compromise you either. Rather it shows that you have courage and character.

8. Hold regular account and opportunity reviews to discuss the next steps. This will provide a forum for salespeople to discuss their frustrations in a safe atmosphere and will ensure that they can respond in a considered rather than a reactive manner to events.

9. Less said is easily mended. So, take a deep breath and count to 10 before saying what you are thinking, or hitting the send button.

10. Ask the buyer, in particular your sponsor, for his, or her advice in how to respond to challenging aspects of the buying process.

12. Look out for early warning signals so that you don’t get taken off your guard and end up in a situation in which you are likely to feel angry, frustrated. That inevitably means you must be prepared to walk away from some opportunities too.