How To Avoid Getting Beaten-Up By Buyers 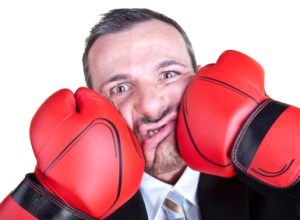 Sellers expect to have to slug it out with other suppliers, but they may ‘lick the competition’ only to be beaten-up by the buyer. We asked sellers about their most bruising buyer encounters and the lessons they had to offer.

Have You Been Beaten-Up By A Buyer Recently?

Almost every salesperson has had the experience of being beaten-up (metaphorically speaking, of course!) by a buyer. Indeed, with the fundamental shift in the balance of power in favor of buyers, selling has become an increasingly bruising activity.

It may be a knockout blow that loses the sale, or perhaps a severe bruising on price and terms; either way, it is often preceded by a slow wearing-down of the seller through ever more drawn-out and complicated buying processes.

Most salespeople who have been beaten up by a buyer will have been hammered on price. The fact is that, in this era of cost-cutting, this is something that buyers are doing more and more zealously.

Buyers are taking advantage of their new power over price in the following ways:

In a market where sellers are chasing buyers and every deal is precious, price is the seller’s soft underbelly. However, most salespeople who have been beaten-up on price will admit that they could, or perhaps should, have done things differently.

As one seller recently put it: “The buyer is not like a school bully who is after your lunch money – it’s simply his/her job to secure the best deal… As sellers, we should never be taken by surprise.”

How to Avoid Getting Beaten-Up on Price

Here are six valuable seller tips on how to soften the blow of buyer price hits:

A Surprise Left-Hook From Procurement

Sellers have learned to fear the involvement of procurement – particularly when it happens close to the point of a contract being awarded. For the buyer, however, involving procurement can often be an astute move. By bringing in procurement late in the day, the buying organization is:

Sellers tell horror-stories of procurement arriving on the scene after months of discussion, threatening to undo the progress that has been made and calling into question key aspects of the contract and its terms.  This is a particular risk where procurement has little domain or project-specific knowledge or expertise.

Procurement, in the seller’s mind, is likely to:

How to Spar With Procurement

So how can we, as sellers, learn to sidestep a left hook from procurement? Well, seeking out procurement earlier will give you a better understanding of their role, as well as their motivation, power/influence and past form. Armed with these insights, you won’t be taken off-guard by their sudden arrival.

If the manager-buyer, or sponsor, cannot guide you in preparing for a match with procurement, then learn from other suppliers and their experiences in selling to the same company.

A Sideswipe from Legal

The champagne has been drained, and now all that remains is the paperwork. However, as sellers have learned, they are particularly vulnerable at the contract stage. The seller is about to step out of the ring when, all of a sudden, legal deals a painful sideswipe.

The manager-buyer may stress the point that signing will be straightforward, but just wait until legal gets involved. Most buyers don’t like vendor contracts full-stop; when it comes to signing them, it is often surprising the issues that may arise.

“The manager-buyer may claim that signing will be straightforward, but just wait until legal gets involved…”

Whenever a buying organization drags its heels on signing, it keeps the successful supplier on tender hooks, and almost inevitably delays the project start- or delivery-date.

In addition, of course, there are the legal costs that the seller may have to bear, as well as the additional hours involved on the part of the sales team.

Tips On Sparring With Legal

Here are five useful tips on how sellers can avoid being bruised at the contract stage:

Sparring With The Wrong Partners

Sellers frequently complain that they get thrown into the ring in an unfair contest with suppliers from different weight categories, e.g. when a buyer wants the service and expertise provided by a big specialized legal firm, while expecting the day rates of the small generalist legal practice. Educating buyers as to the competitor category we should be in is key.

Ready For The Next Round?

A supplier who is licking his/her wounds from the sale may be lacking in enthusiasm, commitment or loyalty for the delivery. The buyer’s victory may be short-lived if it comes at the expense of either the buyer-seller relationship or the viability of the project for the seller. All of this can leave the project dangling by a thread.

Furthermore, if the supplier has been beaten-up to get the sale, then there is a good chance of more bruises coming during delivery and implementation. Without doubt, the risks of being beaten-up are greatest at the project start. Take, for instance, the following scenarios, which center around the issue of access to the people that are required to make things happen during the project’s early stages:

“It quickly becomes clear that things are not what they seem…”

The supplier discovers that one of the senior managers in the buying organization is going to be on holidays for a fortnight during the project kickoff phase; or that another project is taking place; or that a merger or acquisition arises to suddenly divert focus.

It quickly becomes clear that ‘things are not what they seem’, as some of the basic premises upon which the supplier’s solution was defined now appear to be at odds with the reality on the ground. After all, it is only when project delivery commences that there can be a full appreciation of the cultural, political, process and other issues that may impinge on project success.

A bruising at delivery stage can happen if buyer reneges on commitments made in the quid pro quo of negotiation, for example:

Are Sellers Getting Beaten-Up Unnecessarily?

In the words of one sales manager we spoke to: “Salespeople must realize that, as far as most buyers are concerned, the gloves are off. It is a tough marketplace, and we need to become hardened to it – there’s no point in licking your wounds, or crying foul play.”

“Buyers don’t treat salespeople with kid gloves any more, that’s for sure”, said another manager. “That’s why being seen as an expert, rather than a salesperson, is important if you want to be treated with the respect of a peer or equal.”

The point made by many is that sellers are frequently allowing themselves to be beaten-up because of a lack of preparation, or a mismatch of expectations. In particular, they are exposed when they show a lack of understanding of the rules of the game – and specifically those of the buying process.

“…can we as salespeople justifiably complain about the buying process?”

Sellers often complain of gruelling buying processes, as ever-lengthening sales cycles mean they must be willing to ‘go one more round’. They may also give out about buyers who change the rules along the way, or simply make them up as they go.

As another supplier we spoke to pointed out: “The buying process has been designed to put the buyer to the test, to pit one supplier against another and to wear the seller down. It can be a long-drawn-out, often gruelling process, with lots of false-starts and setbacks.”

The question is whether we as salespeople can justifiably complain about the buying process – given that it is simply a competitive reality. Isn’t it more important to address the manner in which we respond to it?

There Is No Point In Crying Foul Play

“I often hear sellers crying foul play”, explained another sales consultant we spoke to, “but whenever I hear a salesperson complain about either being lied to by the buyer, kept in the dark or taken advantage of, I immediately figure that they themselves must be at fault. That is, they have generally failed to adequately understand the buying process, read the situation or spot the early warning signs“, he concluded.

The advice for sellers, then, seems to be to ‘go in with their eyes wide open’ – or, more specifically, to:

In summary, if sellers are to avoid being beaten-up, then for each opportunity or bid they must understand exactly what is involved, as well as how long it is likely to take, what the key stages/decision-making criteria are, etc.

Only then can they confidently get into the ring with a buyer. Only then can they decide whether they should sit this one out or not, based on an assessment as to whether it is a fight they stand a realistic chance of winning.